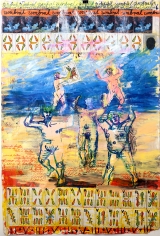 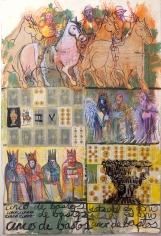 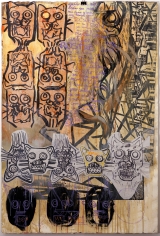 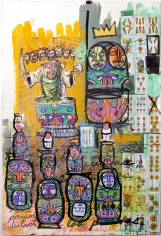 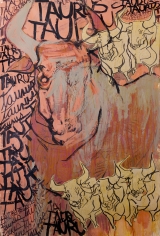 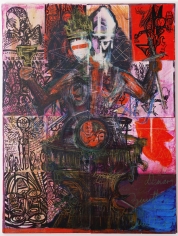 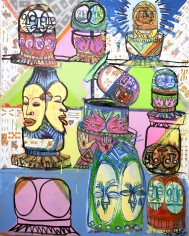 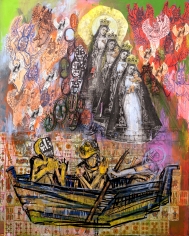 A Veronica Villegas work is nothing if not architectural; in fact, one could think that her painting on a canvas is not unlike a stonemason laboriously stacking block after block of chiluca—a Mexican limestone building material—to construct the elaborate façade of Lorenzo Rodríguez’s Baroque masterpiece Sagrario Metropolitano, the tabernacle adjoining Mexico City’s iconic Catedral Metropolitana. Powerfully asserting its presence on the northern side of the Plaza de la Constitución in downtown Mexico City, it is one of the urban area’s many cultural hearts. Being a resident of Mexico City, Villegas was strongly drawn to it, with its elaborate, visually frenetic façade of cherubs, saints, and local flora, like the chalchihuite, piling atop each other in tall, blocky columns.

These charged architectural features feature prominently in Villegas’ work, with its saints and cherubs—as if taken directly from these façades—symbolizing the Catholic Church’s historical privilege and power as Baroque art and architecture’s main patron. Reconstituting Renaissance architecture to dramatic ends, the Baroque movement was brought to Mexico in the 18th century from Spain and Italy. In Mexico City, it wasn’t merely a religious idiom but conveyed the “triumph of the aristocracy too,” as Lawrence Herzog notes in From Aztec to High Tech: Architecture and Landscape Across the Mexico-United States Border. As I will detail below, Villegas adopts these signifiers of Catholic authority to effectively disempower them by combining them with other, more fringe religious icons from indigenous and African contexts, as well as from popular culture. Creating an even playing field, so to speak, for various religious and folk traditions to be present at once, one does not dominate the other, but rather, in the Latin American spiritist tradition, a radical equivalence is present. It evidences how seemingly incompatible traditions—say, the occult and the Catholic Church—cross-pollinate to create strange, new cultural hybrids.

Villegas’ Sand Almanac polyptych combines saintly icons with musings on Tarot card divination; Cinco de bastos II (2016) revolves around the cards’ 7th arcane, the Chariot, and the deck’s “minor” arcana (cards featuring symbols as opposed to images). Men on horseback, as if pulling an unseen chariot, form the dynamic top part of the collage work, while angels and kings compose the more figurative elements of the composition, and are interspersed with Tarot cards featuring coins and cups, symbolic of victory and abundance. Cinco de bastos I (2016) continues this celebratory tone, as nude figures dance in the central section of the work, holding up a Chariot card. Above and below them in tidy rows are Five of Wands cards, which illustrate conflict and potential gain. In light of the rest of the work, it seems success has been achieved. Sueño-Lince (2016), meanwhile, takes as its starting point the Tarot cards’ 21st “major” arcana, the last one, which features a nude woman dancing at its center, surrounded by a quartet of the fixed astrological signs—Scorpio, Leo, Aquarius and Taurus—that also represent the four corners of the universe and the four elements. In traditional Tarot divination, the card details the cyclical nature of all things, and the perfect unity of all opposing forces. For this work, Villegas has turned the female figure into a kind of mystagogue, a guide to the spiritual world who can cross between heaven, hell, and the material world in pursuit of harmony. Rather than utilizing a central figure, however, Villages has represented this mystagogue with columns of indigenous masks native to the people of Guerrero, Mexico, who recreate a myth about a jaguar—or tecuani in Nahuatl, an indigenous language—that steals community goods until stopped by a local hero. To Villegas, this story “is related to instinct, witchcraft and the occult.” 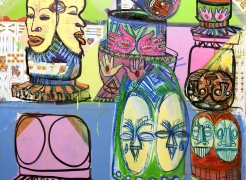